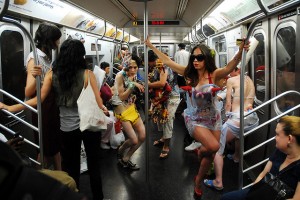 It was a pheromone perfume and it was hard to tell who exactly on this subway was wearing it but everyone was feeling it’s affects. Couples were getting 2am close at 7pm. Single folks’ eyes darted around the train eyeballing the hip and sexy young crowd looking for someone to chat up. This Friday was getting off to an early and heavily aroused start and all it took was the fine fragrance of Bask World and some human pheromones.